How are nonwovens made?

The production of nonwovens takes place in three stages, although modern technology allows an overlapping of some stages, and in some cases all three stages can take place at the same time.

The three stages are:

Conversion into products in a wide range of applications

Nonwovens manufacturing starts by the arrangement of fibres in a sheet or web. The fibres can be staple fibres or filaments extruded from molten polymer granules.

Illustrations of some of the methods used to form a web: 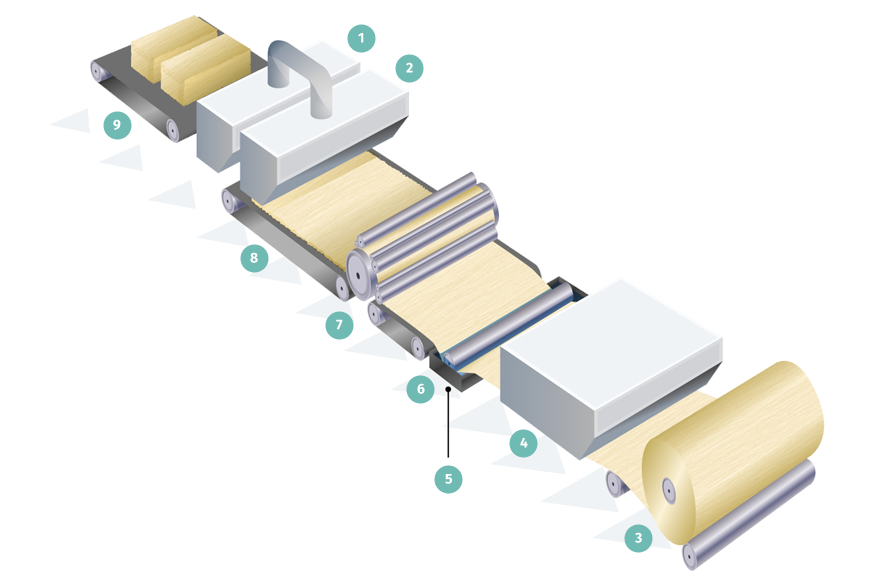 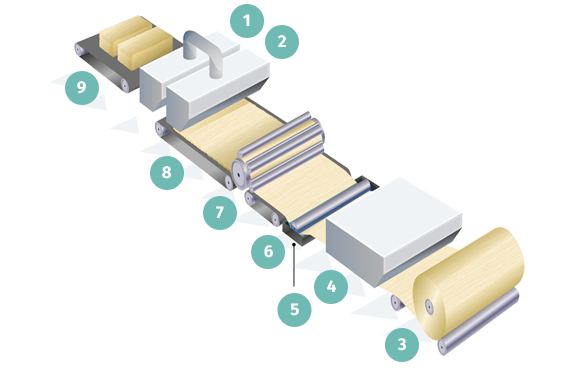 copyright EDANA
Carding is a mechanical process which starts from bales of fibres. These fibres are ‘opened’ and blended after which they are conveyed to the card by air transport. They are then combed into a web by a carding machine, which is a rotating drum or series of drums covered by card wire (thin strips with teeth). The precise configuration of cards will depend on the type of fibre and the basis weight to be produced. The web can be parallel-laid, where most of the fibres are laid in the machine direction, or they can be randomised. Typical parallel-laid carded webs result in good tensile strength, low elongation and low tear strength in the machine direction and the reverse in the cross direction. Machine parameters and fibre mix can be varied to produce a wide range of fabrics with different properties. 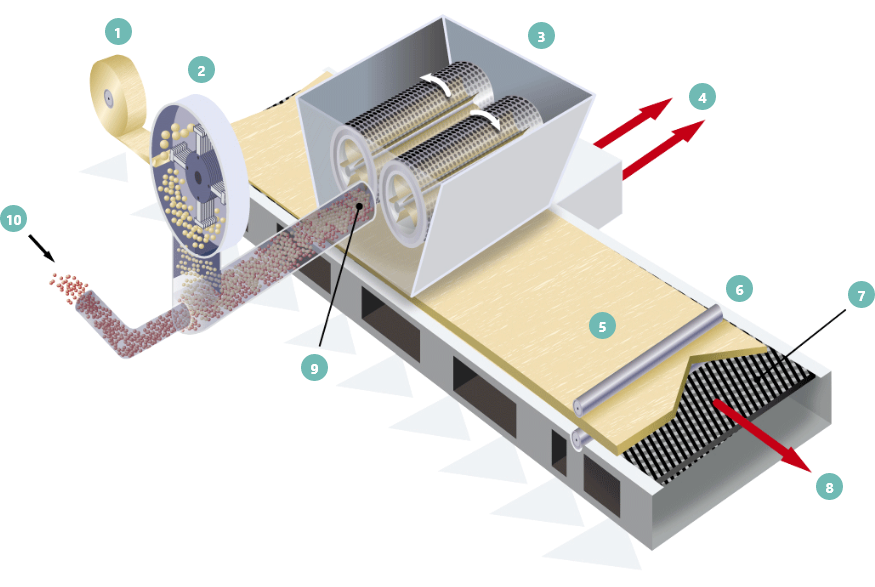 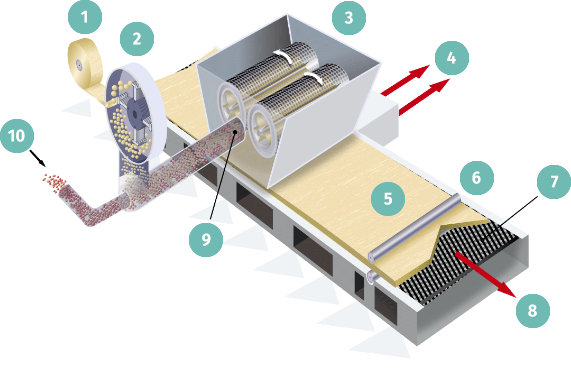 copyright EDANA
In short fibre airlaid the fibres, which are always relatively short, are fed into a forming head by an airstream. The forming head assures a homogeneous mix of all fibres. By air again, a controlled part of the fibre mix leaves the forming head and is deposited on a moving belt, where a randomly oriented web is formed. Compared with carded webs, airlaid webs have a lower density, a greater softness and an absence of laminar structure. Airlaid webs offer great versatility in terms of the fibres and fibre blends that can be used. 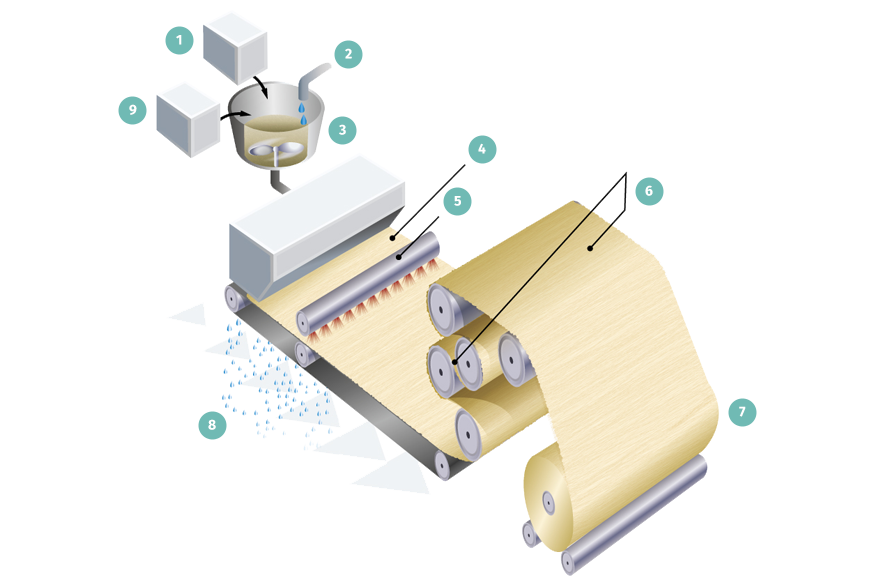 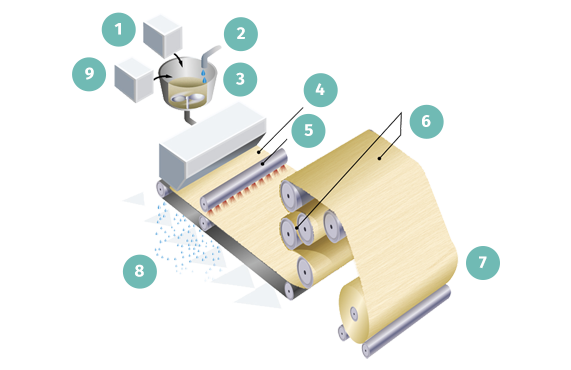 copyright EDANA
The principle of wetlaying is similar to paper manufacturing. The difference lies in the amount of synthetic fibres present in a wetlaid nonwoven. A dilute slurry of water and fibres is deposited on a moving wire screen, where the water is drained and the fibres form a web. The web is further dewatered by pressing between rollers and dried. Impregnation with binders is often included in a later stage of the process.

The strength of the random oriented web is rather similar in all directions in the plane of the fabric. A wide range of natural, mineral, synthetic and man-made fibres of varying lengths can be used. 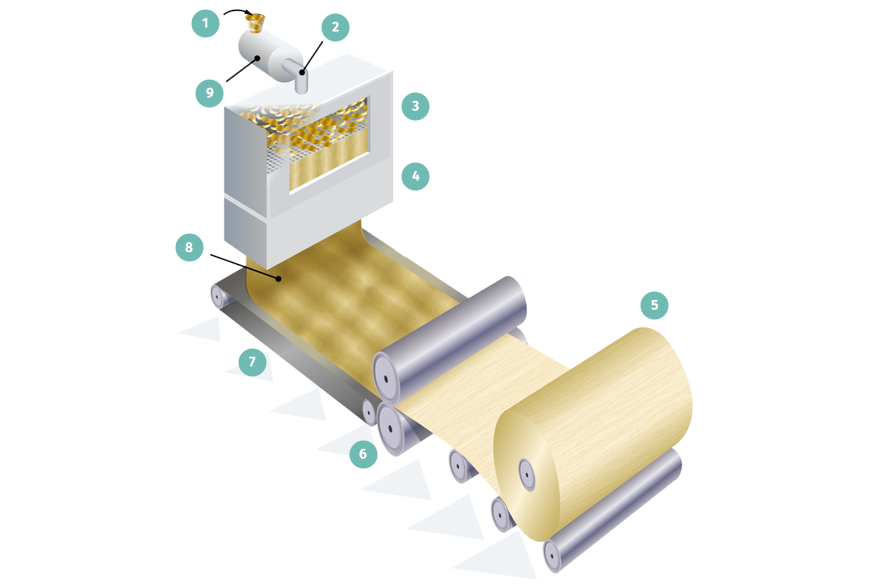 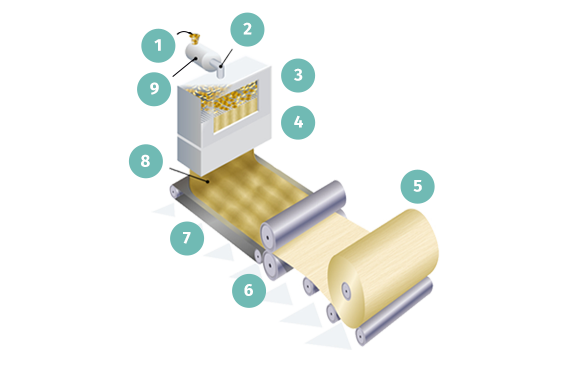 Polymer granules are extruded into filaments through so called spinnerets. The continuous filaments are stretched and quenched before being deposited on conveyor belt to form a uniform web. The spunlaid process results into nonwovens with an increased strength compared to carding, due to the attenuation of the filaments. The downside is that the choice of raw materials is more restricted. Co-extrusion of two components leads to bico fibres, either adding more properties to the web or allowing air-through bonding. Please note that the word spunbonded is reserved for thermo bonded spunlaid.
Meltblown, like spunlaid, starts with extruding a low viscosity polymer. But instead of quenching the filaments when they leave the spinneret, the filaments are being attenuated by hot air streams, keeping the filaments in a partly molten state. This leads to much thinner filaments, with a low tensile strength. The filaments hit a belt or a conveyor belt where they form a web.
Meltblown -roughly speaking- results in filaments with a minimum diameter of 1 micron. For more than a decade developments are going on to produce nonwovens with even finer fibers. These can be of use increasing the efficiency of filtration media or improving the barrier properties.

Technologies in the market are sub-micron meltblown, centrifugal spinning, solution spinning and electrospinning. Although the productivity of these methods is low compared to spunmelt, they are increasingly important for the unique properties they can add to a nonwoven.

Webs have a limited initial strength right after the web formation (depending on various bonding mechanisms). The web needs  therefore to be consolidated in one or the other way. The choice of the web consolidation method strongly depends on functional properties that are needed as well as on the type of fibres used..

There are three basic types of bonding: 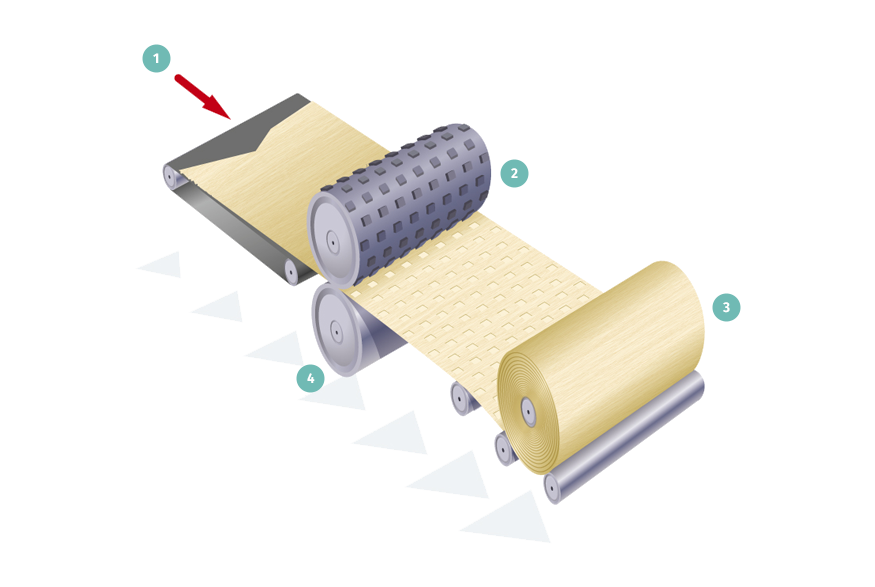 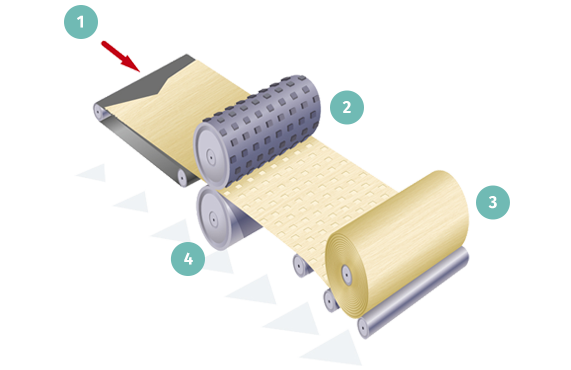 copyright EDANA
This method uses the thermoplastic properties of certain synthetic fibres to form bonds under controlled heating. In some cases, the web fibre itself can be used, but more often a low melt fibre or bicomponent fibre is introduced at the web formation stage to perform the binding function later in the process.

There are several thermal bonding systems in use:

Calendering uses heat and high pressure applied through rollers to weld the fibre webs together at high speed.

Ultrasonic bonding is a technology in which molecules of the fibres are being ‘excited’ under a patterned roller by high frequency movement of a ‘sonotrode’ which produces internal heating and softening of the fibres. 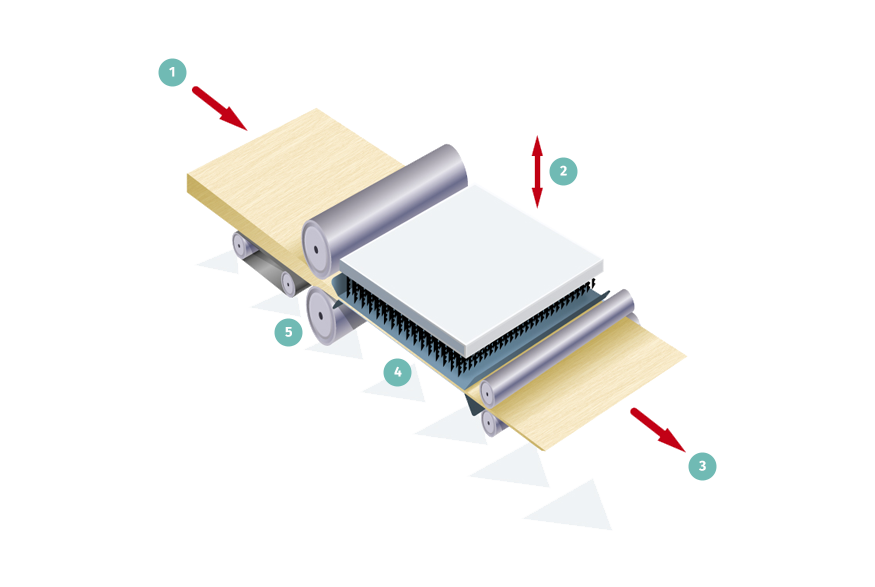 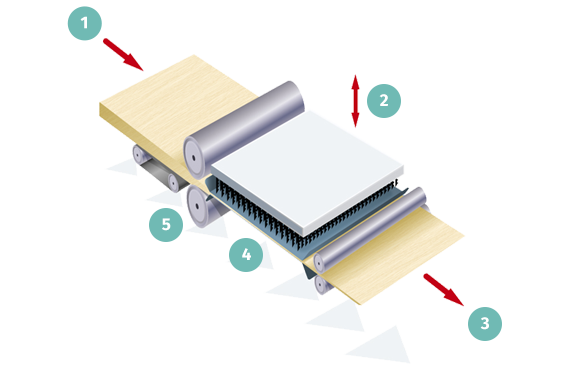 Needlepunching, specially designed needles are pushed and pulled through the web to entangle the fibres. Webs of different characteristics can be needled together to produce a gradation of properties difficult to achieve by other means. Needlepunching can be used with most fibre types but, because of the nature of the process, not with very fine fibers.

Hydroentanglement is commonly applied to carded or wetlaid webs and uses fine, high pressure water jets to cause the fibres to interlace. Hydroentangling is sometimes referred to as spunlacing, as the arrangement of jets can also be used to give a wide variety of aesthetically pleasing effects. The water jet pressure used has a direct bearing on the strength of the web. 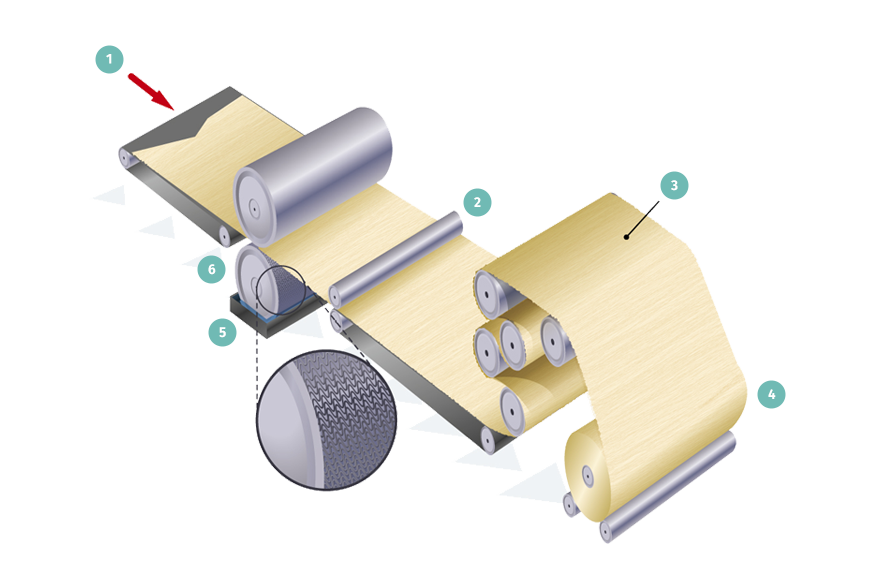 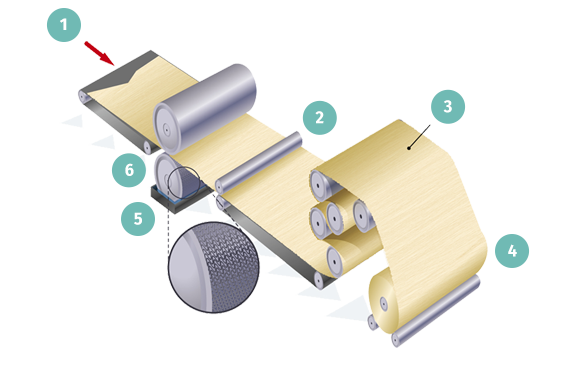 copyright EDANA
Chemical bonding refers to the application of a liquid-based bonding agent to the web. Three groups of materials are commonly used as binders-acrylate polymers and copolymers, styrene-butadiene copolymers and vinyl acetate ethylene copolymers. Water based binder systems are the most widely used but powdered adhesives, foam and in some cases organic solvent solutions can be found.

The opportunity to combine different raw materials and different technologies accounts for the diversity of the industry and its products.

Nonwovens can be made conductive, flame retardant, water repellent, porous, antistatic, breathable, absorbent and much more. They can also be coated, printed, flocked, dyed or laminated to other materials.

Nonwoven manufacturing ends usually with large rolls of product. Converters convert -as the word says- this roll good into a consumer product.

Sometimes converting is done in 2 steps. Before manufacturing the finished product one might want to bring the rolled good one step closer to the final product by slitting, cutting, folding, sewing or heat sealing.