By continuing to use the site, you agree to the use of cookies. Find out more by following this link.
Ok
LinkedIn
Twitter
Mail
Print
Pdf 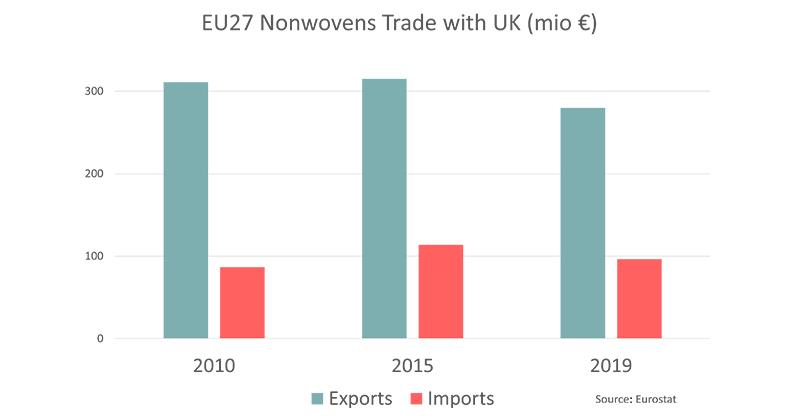 EDANA welcomes the Trade & Cooperation Agreement (TCA) signed in December 2020 between the European Union and the United Kingdom and, in particular, its specific rules of origin for nonwovens.

The most recent available figures cover 2019, when the UK exported nonwoven roll goods worth €96 million to the EU, while export traffic in the other direction reached a value of €280 million. The UK remains the second biggest trade partner for EU local manufacturers after the US.

Jacques Prigneaux, EDANA’s Market Analysis and Economic Affairs Director, said “this trade agreement not only guarantees that nonwoven roll goods will be able to continue to travel between EU member states and UK without customs duties, but also recognizes that a nonwoven process is sufficient to confer the origin on the product.

“In order to qualify for the zero preferential tariff under the EU-UK Trade and Cooperation Agreement, products classified in HS 5603 must originate in the EU or the United Kingdom. According to the specific rule for nonwovens, devised and promoted by EDANA, and included in the TCA, any nonwovens produced locally will be considered as originating in the EU or United Kingdom, even if it has been produced using non-originating materials.”

Jacques Prigneaux added “obviously, EDANA member companies can contact me and I will be pleased to guide them through the procedure to claim a preferential import tariff.”

Pierre Wiertz, General Manager of EDANA said “In this news, I see two key achievements and subjects of satisfaction for nonwoven producers whom we value as the core of EDANA’s membership. On one hand, the ability for all of them to keep doing ‘business as usual’, or even expand trade opportunities, whether they trade from the EU or the UK, and on the other hand, the official recognition, hopefully once and for all, of the fact that manufacturing nonwoven roll goods is a substantial enough operation to confer origin status of the country where the resulting goods are obtained. This latter event marks another step in the independence of the nonwovens industry from the traditional textile customs rules which too often unnecessarily constrained its development.”